Back to Customer Stories

Seeking to benchmark a storage product’s performance, NetApp turned to us as a trusted partner and leader with data technologies to design, execute, and produce a series of bespoke and relevant Big Data scenarios. Working alongside the NetApp team, we delivered rich data and insights to build their own understanding and add to their go-to-market strategy.

A need for Elasticsearch expertise

As a leader in their field, NetApp’s product evangelism team are always looking for opportunities to optimize their products for cloud-native workloads. As Elasticsearch is one of the most popular cloud-native applications available, NetApp’s Pavel Klushkin needed highly skilled Elasticsearch experts.

“I needed Elasticsearch experts to build the scenarios, do the benchmark and stress tests, and to run the analysis”, Pavel states.

Itamar and the BigData Boutique team were already well known within NetApp, having completed a highly successful project with the DevOps team.

“When the DevOps Manager told me about the work BigData Boutique had done for them, I contacted Itamar and the team straight away.”

In a competitive marketplace, it was important for NetApp to be able to accurately test and highlight the strengths of Elasticsearch running on Cloud Volumes ONTAP.

Drawing on the expertise from the product team at NetApp, it was crucial to design fair tests and scenarios which would test and produce measurable results to support future marketing campaigns and product releases.

“We needed to build scenarios which were more challenging than standard requirements to show why you should use Elasticsearch on Cloud Volumes ONTAP.”

A key part of BigData Boutique’s value add during their engagement with NetApp was the market experience, as well as technical expertise, of Elasticsearch. BigData Boutique brought an “awareness of what users’ current and real challenges are with Elasticsearch”, says Pavel, which allowed the construction of relevant and structured scenarios to assess Elasticsearch performance on Cloud Volumes ONTAP.

“We worked together to build tests that demonstrate Elasticsearch’s performance on Cloud Volumes ONTAP’s capabilities.”

BigData Boutique took the lead when testing the Elasticsearch clusters running on Cloud Volumes ONTAP. This was vital for two reasons. First, it made the testing independent and the outcomes from the exercise impartial. Second, it fully relieved any burden of supervising or guiding BigData Boutique from Pavel and his team.

Tests used included a read-heavy data aggregation exercise and simulating Kibana dashboards’ usage. These are both common Elasticsearch requirements, although can often cause performance issues with storage from cloud vendors.

Based on what the BigData Boutique team had learned about Cloud Volumes ONTAP, as well as their own expertise with Elasticsearch, they knew these would be useful tests for Pavel’s team. Outside of benchmarking Elasticsearch performance during the tests, BigData Boutique replicated a real customer’s usage patterns. With Kibana, this simulation testing involved executing queries in parallel on certain intervals, as well as simultaneous non-trivial queries. 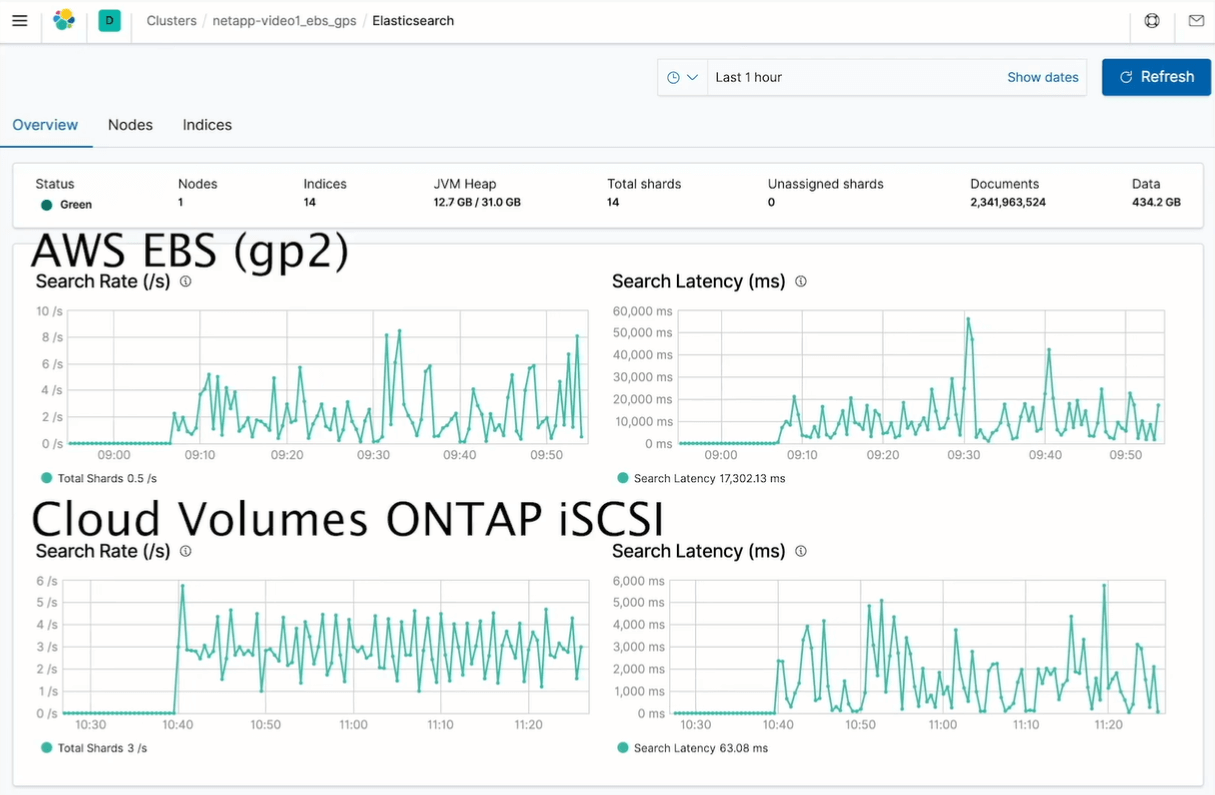 The analysis of the tests and deployment scenarios was of critical importance. Not only did the NetApp team have big outward-facing plans for the data, but it would also serve as a valuable internal resource for research, development, and product managers across the whole organization.

With their Elasticsearch knowledge, BigData Boutique were able to compile the data from the tests and scenarios in an easy to digest format. With an iterative process, BigData Boutique achieved a high degree of precision whilst keeping the NetApp team a fully informed part of the process.

During the engagement with NetApp, BigData Boutique were non-disruptive and self-sufficient. “They did the monitoring, tests, and analysis, and presented us with the conclusions”, notes one NetApp member of staff, “everything about the project with them was simple”.

NetApp already knew that Cloud Volumes ONTAP was a fantastic product, but BigData Boutique were able to tell them quantifiably how good it really is.

One example of this is the tests and scenarios BigData Boutique designed around read-heavy data aggregation. “I learned we’re better than native solutions by a fair margin for Elastic data aggregation use cases”, Pavel states. BigData Boutique’s thorough exploration of Elasticsearch running on NetApp’s Cloud Volumes ONTAP further enhanced internal knowledge around the most performant storage classes for specific Elasticsearch workloads.

“The insight they were able to provide… it’s invaluable.”

“They did everything from the Elasticsearch side… I just provided them with access to our platform” said Pavel, in reference to the smooth engagement with BigData Boutique.

“We provided them with the storage, and they built the Elastic clusters, ran the scenarios and tests, and supplied us with the results - it was really straight forward.”

The work that BigData Boutique did with NetApp made the creation of a whole suite of marketing resources possible. The analysis that BigData Boutique provided to Pavel and his team has been made into case studies, solutions booklets, cost and performance optimization comparisons, and online adverts.

The subsequent marketing campaign from BigData Boutique’s testing and analysis was really important for communicating two things, according to the NetApp team.

First, BigData Boutique “found the customers' challenges and use-cases for NetApp’s platform and Elasticsearch”. Second, with the real-world insights provided by BigData Boutique, NetApp were able to communicate the “real and relevant value NetApp CVO can bring to Elasticsearch users”.

With the successes of two engagements with NetApp under their belt, BigData Boutique are continuing to work with Pavel’s team.

“We’ve already started researching other cloud-native use cases on our storage with BigData Boutique”, he says.

Looking to repeat the successes of this project for the hattrick of NetApp and BigData Boutique engagements, the future is exciting for the developing partnership.